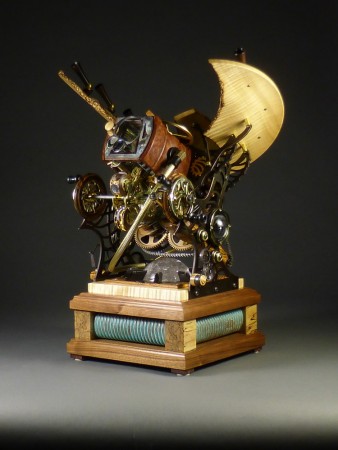 Steampunk and kaleidoscopes. What a delicious collision!  One thing I love about kaleidoscopes is they provoke a sense of mystery or awe that is created from the image. I’ve always felt it’s important to create that same curiosity and sense of exploration when somebody sees the outside of the sculpture.  My recent art is new for me, incorporating kinetic sculptures and gadgets, but in a way it has been part of me my whole life, my makeup, the things I love to do.  I have always loved gadgets, optics, fantasy. I always felt like I was born a hundred years too late and I wanted to be an inventor. With this latest piece I get to play with all sorts of wonderful mechanics and optics and they get to be fashioned into a creative art form.  Historically, people have expressed themselves in specific ways without an idea they are working in a particular art form. Then someone comes along and gives the form a name.  I’m not really out there making Steampunk things it just happens the creating I love to do that combines gadgets and fantasy with mirror systems, optics and motion fits into the Steampunk genre. 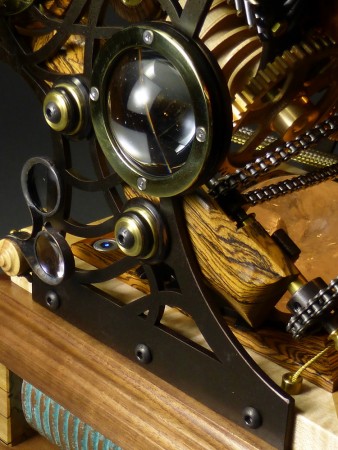 The creative process for this piece was interesting. I wanted to blend a creature, gadgets, optics, kaleidoscopes and fantasy all into one. After sketching and making lists, I take all these concepts into my being and visualize what components work together and which things don’t. Then I bring them into a physical form to see if the idea really does work the way I imagined it. The design is worked out as a whole entity and then each part needs to work
individually and also work together to support the whole sculpture. Trial and error refines the design and I definitely experience excitement and some uncertainty as I’m working on all of the components. Sometimes the form isn’t working well at all and sometimes a project turns out much better than I ever imagined—I really felt that happened here! Doing work that I have never done before is exciting fun but also puts me into an area that is not my familiar comfort zone. So there is a lot of stretching and growth when creating new pieces of artwork.

The mechanics and objects for the scope started with a fairly simple converging two mirror system. The use of this mirror configuration provides many spaces for images as it has four different planes or windows interacting with the mirror system. One of the planes is where the viewer looks into the scope to see the image. The window opposite the eyes has three acrylic image cells that rotate with the main front wheel. The image created by these cells are filled with lampwork glass suspended in liquid. A window on the lower side of the mirror system interacts with cams and another four freely turning wheels on a larger wheel, each on of these four wheels has an assortment of magnets in their  hubs. These magnets respond to another small wheel close to the image opening the small wheels turn into. The top panel is brass with a filigree pattern cut into it. 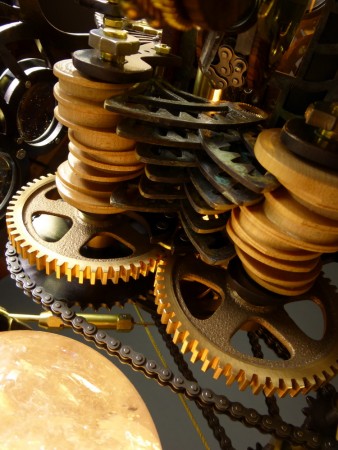 Then to help view the image I’ve included a set four lens groups including lenses with mild magnification to extreme magnification and a couple of reducing lenses. Magnets are used so the lens groups can be attached and removed on the eye end of the kaleidoscope. When lens sets aren’t being used the magnets hold them on the steel framework.

There are two lighting systems including two switches. One will illuminate the quartz crystal ball on the base, mood lighting and also turns on a set of lights illuminating the items on the inside of the mirrors. The second switch will illuminate the rotating objects cell and also light up the quartz ball. All lights are LEDs and are dimmable, exterior lighting can also be used to light up the image or enhance the LED lighting. A set of lights on the lower window can also be rotated to feather the light to give the inside illumination different effects.

There are two axles with cranks on both axles. One has a left or right crank handle and the other crank handle faces the viewer. The crank facing the viewer runs most of the mechanisms. With a turn of the crank two sets of chains and sprockets are set in motion one going to the image head and the other one going to a series of gears that provides the right and left symmetry of the wings and cams. 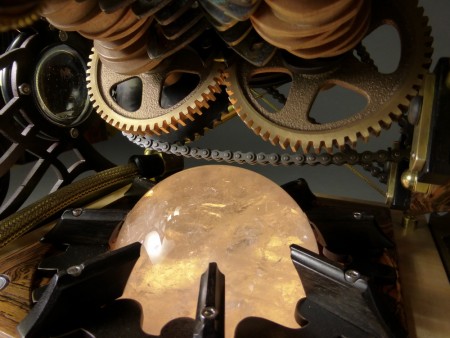 The image cell driven by chain and sprocket has three liquid-filled lampwork acrylic cells turning counter rotational to the motion of the image head. The acrylic cells holding custom lamp-worked glass are on an axle with pulleys moving past a stationary cable so as a head turns one direction the cells will turn in a counter rotational direction. There is also a fun little geared unit is powered by one of the axils.

The other chain drive sprocket is connected to an axle with a gear that synchronizes another gear and axle providing the left right symmetry to the wings and a set of cams. The large and small wings are set up with sets of leavers creating a motion slightly out of synchronization with each other. The out of sync action creates a very interesting fluid feel to the motion. A set of six cams on a couple axles with leavers following the cams set up an interesting motion in and out of the kaleidoscope image. The leavers have various gears and textures attached to them, as the crank is turned and the cams activated the gears go up and down inside of the image space. The cams are fun to observe both outside and inside of the scope. 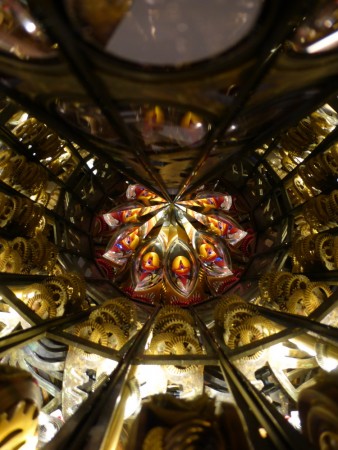 The axle that runs perpendicular and below the kaleidoscope has for small freely rotating wheels held inside of a larger wheel. The small wheels have magnets on the hubs and interact with another wheeled magnet that’s close to the image port the wells go past. The speed of rotation and depending on how often the action is reversed will affect a seemingly random or chaotic pattern as each one of the four wheels passes into the image space inside the kaleidoscope.